Foley: I’m sorry to disappoint you Mike Check fans, but as you’ve heard, Mike suffered a heart attack and is now recovering in hospital. So he can’t be here on “This Is your Life” tonight. But he’ll hopefully return tomorrow because it would be a shame to cancel the big finale. But tonight, I’m joined by two guests; one who’s now “recovered” after Mark Tyson’s “attack”. Sorry, that was a bad pun. But I welcome back; Ringo Starr, who I hope has put his feud with Mike to the side since, like me, you must feel awful for what happened to him?

Ringo: (*laughs*) What are you babbling about Mick? The only thing that’s been awful, in my opinion, has been this show until yesterday.

Foley: Well your entitled to your opinion. But I’d like to introduce our 2nd guest, who I would have liked to have had on a couple of weeks ago, but due to scheduling conflicts…or should I say ‘people who make my Mankind persona look sane’ hijacking the show, she couldn’t join us until today. So without any further ado, it’s the co-star of my upcoming WWE Network show “Holy Foley” and she’s “Mr Foley’s baby girl”; it’s my daughter, Noelle Foley!

Noelle: Hi dad, its great to finally be RIGHT HERE in the home of the famous Mike Check. But it’s a shame that I couldn’t get the chance to meet him because of what happened.

Foley: Yes it is, but have you said hello to Ringo Starr?

Noelle: Hello Mr Starr, I’m so happy to meet you. I’ve never listened to The Beatles that much since dad plays Christmas music constantly, but I hear good things.

Ringo: Quite. I’m also happy to meet you. And I’ve heard some good things from your father about you. But he didn’t mention that you were as ravishing as you look in person. Actually, did you know that we share a “favorite” thing?

Foley: (*laughing in an angry manner*) Yeah that’s funny Ringo, for a moment there you’d think you were coming on to my daughter?

Ringo: Yes. Is that a problem?

Foley: Well that’s not a problem not for me but I know someone who does have a problem with that. Meet (*pulls a dirty sweat sock out of his pants and wears it on his hand*)….MISTER SOCKO! 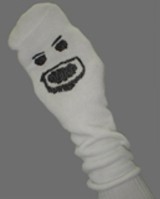 Ringo: Mister Socko? Who are you babbling about? And why are you wearing that disgusting…….?

Foley (*releases the hold*): Sorry Noelle, I shouldn’t have “socked it to him”, but I just didn’t like the cut of his jib!

Noelle: No dad, I wanted you to stop so I could do this (*Takes Mr. Socko, wears it on her foot and then kicks Ringo in the testicles*).

Ringo: (*coughing*) That’s it! I will sue you! Mike Check! Your Daughter! His daughter! And everyone else here! I’m Ringo bloody Starr and I deserve respect! (*storms off*).

Foley: I hope that Mike’s okay and I don’t get us all in trouble for this when he comes back? But Ringo made this more personal than that time when “Sign Guy” wanted someone to cane your brother Dewey.