← Happy, Happy Birthday Baby by Dolly Parton and Willie Nelson
The Stripper by David Rose and His Orchestra →

Foley: Okay Mike, today “Mrs Foley’s baby boy” Mick Foley finally presents to you your huge surprise. So Mike, welcome to “MIKE CHECK: THIS IS YOU LIFE!” Are you ready to meet your first mystery guest?

Mike Check: Sure Rick, the suspense is killing me.

Foley: I thought that I told you that it’s “Mick”, but I guess I’ll just have to be “Rick Foley” for this month. But anyway without any further ado here’s the 2-time Hall Of Famer, who’s real name is Richard, but you might know him as…

Mike Check: I know feller, since you were a WWWF wrestler, it must be your pal; Rick Flair. Or perhaps…no it can’t be Richard Strauss?

Mick Foley: No that’s the wrong theme…? I should have played…oh forget the theme, because here’s a man that needs no introduction. Your first guest is Beatles legend, it’s your old friend; Ringo Starr! 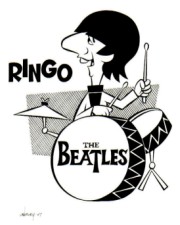 Mike Check: Hold on there! This feller’s no friend of ole Mike! Why are you bringing this no good big-nosed hack here?!

Foley: But I was led to believe that you both were best friends?

Ringo: That’s what I told you Mick because I came all the way from England just to rub my Hall of Fame awards in that cowboy’s face. So how many awards have you won Mike? That useless BBC award two years ago? Don’t make me laugh. You know after this senile old geezer tried to fight me, the coppers now won’t even let him out of the America, let alone his own house. A scuffle in which I was the victor by the way, because it’s just like Muhammad Ali says…”I’m The Greatest!”

Mike Check: Sorry for my language Rick but, Gosh darn it! “The Greatest”, my foot! I might be an old man but I would’ve won that fight there feller if the cops didn’t interrupt and start chasing me like I was Benny Hill. And I don’t understand how you became the drummer for The Beatles when you’re such a no talent hack!

Ringo: Oh I’m a hack? What happened to your band, “Mike Check and The Markets” or whatever that dribble was called? You failed in music so you became a mere radio Disc Jockey! That sums up your “life”! Talk about a “hack”?

Mike Check: Well feller, if you were a Disc Jockey, you’d be working for radio station, WDIK! You’d be “Richard Head”, your partner would be “Dick Cranium”, on “The Dick He…!

Foley: Guys! Guys! Let’s cool it there and save this for another day.

Foley: Yes, I thought it would have been a good idea for Ringo to be a re-occurring guest, since…we haven’t even got to how you two met yet?

Mike Check: Something tells me I’m going not going to enjoy this month, let me tell you.

← Happy, Happy Birthday Baby by Dolly Parton and Willie Nelson
The Stripper by David Rose and His Orchestra →